In this project, my main goal was to create a simple level design and add a theme to it. The first step was creating a tile map of the level, indicating where certain obstacles and objects would be placed. Then a theme was chosen and assets were created based on that theme. Finally, a character was created and the assets were put together to create the final version of the level.

The Objectives of the Level Design 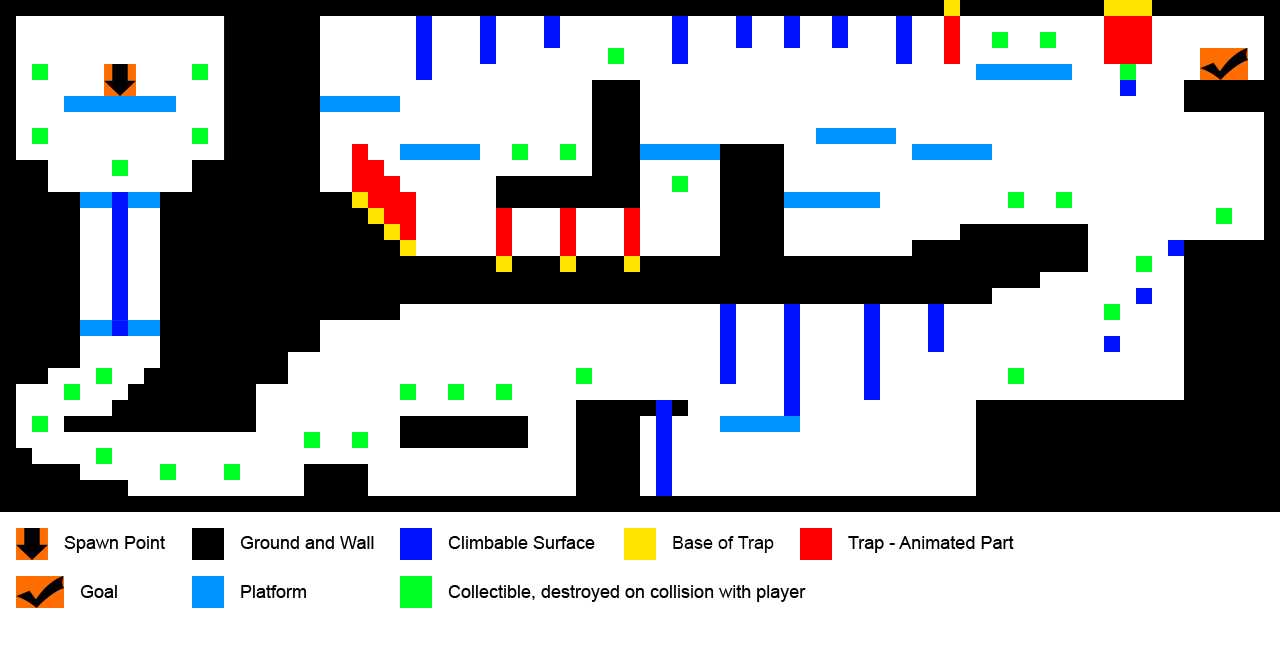 The main idea for the level was to create a small obstacle course that would introduce all elements of the game to the player, first in a safe environment, then slowly adding those elements together to create a challenge.

Near the spawn point, the player is shown the collectibles that they will collect throughout the map, immediately after it, they are taught the concept of a climbable object by using the stair object. That is followed by a small platforming challenge, meant to teach the player how the basics of the jumping mechanic works.

What follows is a simple puzzle that shows the players that they can grab a climbable object while jumping. This section also serves to demonstrate that player can jump while holding on to those objects. If the player fails a jump on this section, they can try again without losing much progress. The platform under the first two chains can be used to skip part of this puzzle if the player chooses to do so.

The next puzzle uses the ideas that were just introduced in a more challenging way. The players do not have the same room for error they had previously and missing a jump requires the player to start the puzzle over from the beginning.

After a section that shows the players that the thin platforms do not block the player’s jump and that they can jump down when standing on top of them, the first trap is shown. It has a distinct color and appearance, indicating that the tile contains a spike trap. At this point the player is shown how the traps work: they are activated whenever the player approaches them. By confining the player to a small area where they cannot simply jump over the trap, they are expected to learn how to dodge the trap.

At this point the player should know all the mechanics of the level, so spikes and climbable objects are combined to create a platforming challenge over previous sections of the map. If the player misses a jump, they will lose progress. The very final jump is meant to test how well the player has mastered the jumping and climbing mechanics, as well as how well they understood how to dodge the spike traps.

Designing the Level’s Theme and the Player’s Character

The main idea for the level was to create a “temple”-like structure that the main character would explore in order to reach a treasure at the end. By using Aztec and Inca art as an inspiration for the design of the temple, a golden/orange color scheme was chosen for the map itself. While initially a Temple Explorer was created as the player character, the color scheme of the character was too similar to the background, making it harder to see the character in the level.

The solution was to create a character based on the Phantom Thief character archetype common in picaresque fiction, with a very distinct color scheme to make the character stand out from the level.